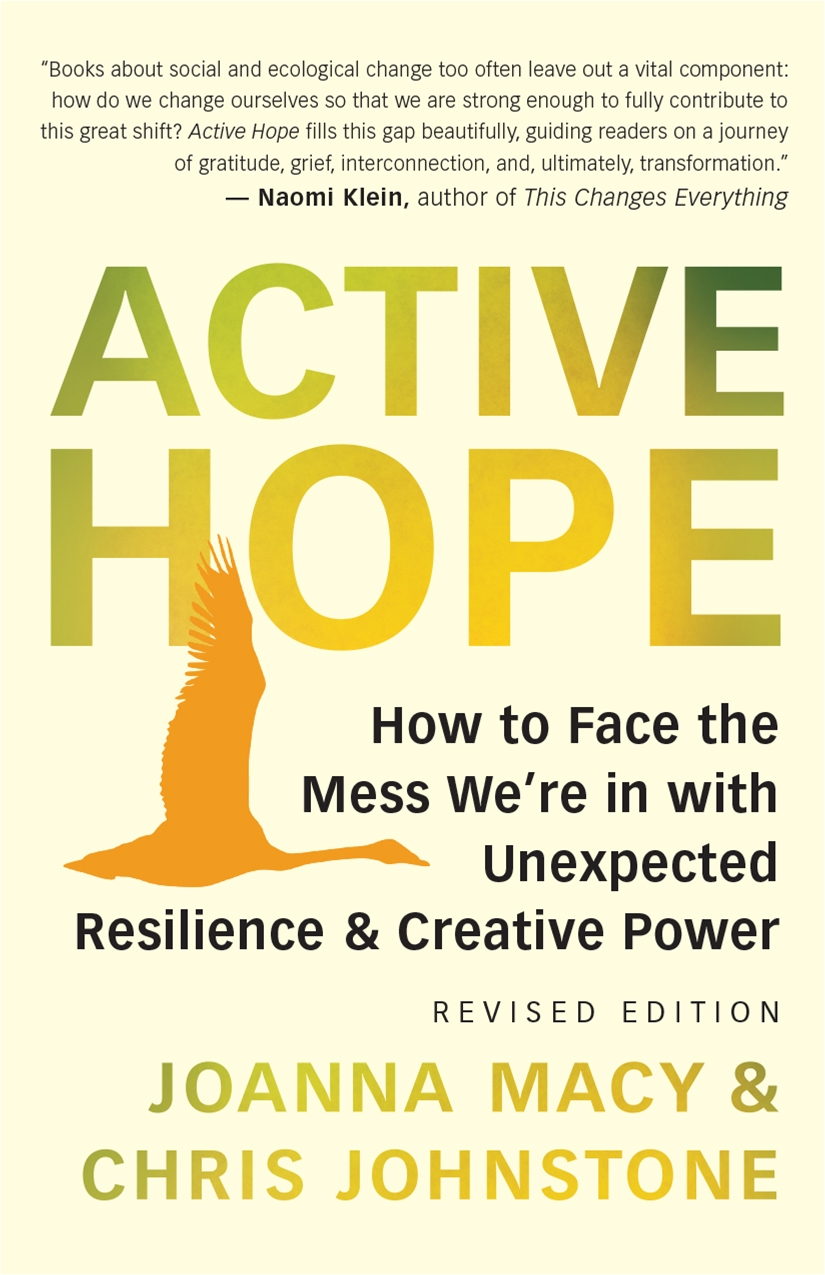 The challenges we face can be difficult even to think about. Climate change, war, economic upheaval, and a politically divided nation create what can feel like an emergency of overwhelming proportions. In the newly revised edition of their book Active Hope, authors Joanna Macy and Chris Johnstone show us how to strengthen our capacity to face this crisis so that we can respond with unexpected resilience and creative power. Drawing on decades of teaching an empowerment approach known as the Work That Reconnects, the authors guide us through a transformational process informed by mythic journeys, modern psychology, spirituality, and holistic science. This process equips us with tools to face the mess we’re in and play our role in the collective transition, or Great Turning, to a life-sustaining society. We hope you’ll enjoy this excerpt from the book.

The year 2020 began with dead birds falling from smoke-filled skies as wildfires raged in Australia. It ended with a global death toll of nearly two million people killed by a pandemic that was still on the rise. Looking back, this was the year the Great Unraveling went mainstream.

Do you have the feeling that our world is falling apart? Or that our human civilization and planetary ecosystem are in dangerous decline? That’s what we mean by the Great Unraveling, a term suggested by visionary economist and author David Korten when considering how future generations might talk about our time. The Great Unraveling is more than just a few isolated disasters. As we’ll explore, there’s a larger pattern at work.

Canaries were once used in coal mines to provide warning of toxic gas. When the birds died from breathing invisible poisons in the air, miners knew they were in danger and needed to act quickly. The massive decline in global bird populations tells us something similar. Since 1970, nearly three billion birds have died in North America alone. Scientists have commented that this staggering loss suggests the very fabric of North America’s ecosystem is unraveling. Happening throughout our whole world, it is not just ecosystems that are unraveling, but our social systems too.

Over the past fifty years, each decade has become warmer. Extreme weather events, such as record-breaking heat waves, wildfires, droughts, floods, and storms, have become more common, a trend that will make future conditions much worse. As global heating continues, the proportion of land becoming too hot to live on is set to increase from 0.8 percent in 2020 to 19 percent in 2070. This could displace between one and three billion people.

Those who are younger will experience these changes most, with children born in 2020 between two and seven times more likely than their grandparents to suffer through floods, heat waves, droughts, wildfires, and crop failures. The term climate justice draws attention to both this intergenerational injustice and the ways climate disruption disproportionately harms people living in low-income communities and countries.

Climate change isn’t the only problem we face. Human population and consumption are increasing at the same time as essential resources, such as fresh water, fish stocks, and topsoil, are in decline. Extreme inequality is on the rise, with more and richer billionaires accumulating wealth in a world where hundreds of millions of people still starve. While the economic impact of the Covid-19 pandemic has left many feeling desperate about how they’re going to manage, $2 trillion is spent globally each year on preparing for and engaging in warfare.

Hope is often thought of as the feeling that things are going to get better. When facing the mess we’re in, it is difficult for most of us to have that. Looking into the future, we can no longer take it for granted that the resources we depend on — food, fuel, and drinkable water — will be available. We can no longer even be certain that our civilization will survive or that conditions on our planet will remain hospitable for complex forms of life.

We are starting out by naming this bleak uncertainty as a pivotal psychological reality of our time. We may wonder whether we — our families, our civilization, and even our species — will make it. Yet because fears for our collective future are usually considered too uncomfortable to talk about, they tend to remain an unspoken presence at the back of our minds. We often hear comments such as “Don’t go there, it is too depressing” and “Don’t dwell on the negative.” The problem with this approach is that it closes down our conversations and our thinking. How can we even begin to tackle the mess we’re in if we consider it too depressing to think about or discuss? This blocked communication generates a peril even more deadly, for the greatest danger of our times is the deadening of our response.

Yet when we do face the mess — when we do let in the dreadful news of multiple tragedies unfolding in our world — we can feel overwhelmed. We may wonder whether we can do anything about it anyway.

So this is where we begin: by acknowledging that our times confront us with realities that are painful to face, difficult to take in, and confusing to live with. Don’t be surprised if you find yourself feeling anxious, defeated, or in despair.

There’s something else we’d like to bring in alongside this difficult starting point. It is a recognition that when we’re at our most exasperated, we can sometimes surprise ourselves. We might discover strengths we never knew we had or experience degrees of aliveness we’d not even suspected were available to us. This is a time to reach out and find new allies, as well as to discard forms of thinking and behavior that have led us astray. In a process known as adversity activated development, our very act of facing the mess we’re in can help us discover a more enlivening sense of what our lives are about, what we’re here to do, and what we’re truly capable of.

Do you hope this will happen for you? Or that you might play a role in helping this happen for others? If so, we invite you to join us in our journey. Together we will explore how we can access unexpected resilience and creative power, not just to face the mess we’re in, but also to play our part in doing something about it. Whatever situation we encounter, we can choose our response. When facing overwhelming challenges, we might feel that our actions don’t count for much. Yet the kind of responses we make and the degree to which we believe they count are shaped by the way we think and feel about hope. Here’s an example.
Jane cared deeply about the world and was horrified by what she saw happening. She regarded human beings as a lost cause, as so stuck in our destructive ways that she believed the complete wrecking of our world was inevitable. “What’s the point of doing anything if it won’t change what we’re heading for?” she asked.

The word hope has two different meanings. The first, which we’ve touched on already, involves hopefulness, where our preferred outcome seems reasonably likely to happen. But if we require this kind of hope before we commit ourselves to an action, our response gets blocked in areas where we don’t rate our chances well. This is what happened for Jane — she felt so hopeless she didn’t see the point of even trying to change things.

The second meaning is about desire. When Jane was asked what she’d like to have happen in our world, without hesitation she described the future she hoped for, the kind of world she longed for so much it hurt. It is this kind of hope that starts our journey — knowing what we hope for and what we’d like, or love, to have happen. It is what we do with this hope that really makes the difference. Passive hope is about waiting for external agencies to bring about what we desire. Active Hope is about becoming active participants in the process of moving toward our hopes and, where we can, realizing them.

Active Hope is a practice. Like tai chi or gardening, it is something we do rather than have. It is a process we can apply to any situation, and it involves three key steps. First, we start from where we are by taking in a clear view of reality, acknowledging what we see and how we feel. Second, we identify what we hope for in terms of the direction we’d like things to move in or the values we’d like to see expressed. And third, we take steps to move ourselves or our situation in that direction.

Since Active Hope doesn’t require our optimism, we can apply it even in areas where we feel hopeless. The guiding impetus is intention; we choose what we aim to bring about, act for, or express. Rather than weighing our chances and proceeding only when we feel hopeful, we focus on our intention and let it be our guide.


Ecophilosopher JOANNA MACY, PhD, is a scholar of Buddhism, general systems theory, and deep ecology. A respected voice in movements for peace, justice, and the environment, she interweaves her scholarship with five decades of activism. She lives in Berkeley, California. Physician and coach DR. CHRIS JOHNSTONE is a specialist in the psychology of resilience, happiness, and positive change. He lives in Scotland.

Excerpted from the book Active Hope. Copyright © 2012, 2022 by Joanna Macy and Chris Johnstone.